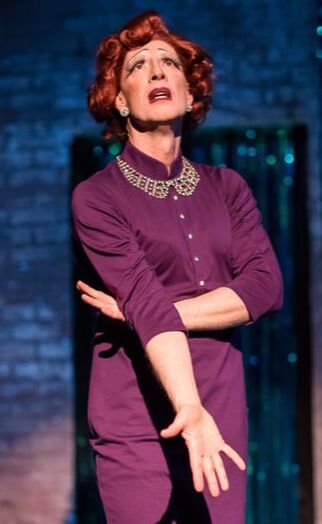 Larry Connolly in The Legend of Georiga McBride, 2019.
About
For 25 years, Vermont Stage has held a unique position as the only year-round professional theatre in the region, rooted in our goal to bring culturally and socially relevant plays to the forefront. As Northern Vermont's home for contemporary theatre, we aim to provide timely and engrossing theatre to a community that otherwise would not have access to these stories.
Each season, we offer a range of World, Regional, and Vermont premieres, arts education, including the largest youth playwriting program in the state, and a host of community engagement experiences and activities. Our programming sparks conversation, celebrates diverse voices, and asks us to engage with our world in surprising and challenging ways.

History
Founded in 1994 by Blake Robison, Vermont Stage spent the first six years primarily producing reimagined classics out of Champlain College and University of Vermont. In 1998, we
produced our first World Premiere called Mad River Rising by Vermont playwright Dana
Yeaton, which we took on a statewide tour and went on to win a Moss Hart Award for Best Professional Production in New England. In 2000, under the Artistic Direction of Mark Nash, Vermont Stage became the resident theatre at FlynnSpace, the Black Box theatre at The
Flynn Center, where the company and its programming grew exponentially, cementing
Vermont Stage as a staple in the community.

Contemporary Theatre
Since 2011, under Producing Artistic Director Cristina Alicea,Vermont Stage's programming
has shifted to focus on the production of contemporary theatre. By highlighting present-day stories, Vermont Stage strives to produce theatre that honors the immediacy of the art form
by reflecting back our society as it grows and changes in real time. Every Vermont Stage season is curated to give voice to the pertinent issues of the day, especially those that
directly impact our community. 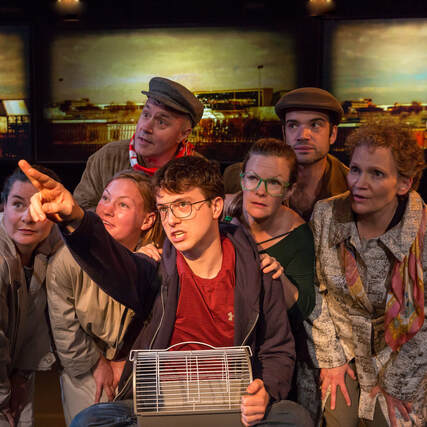 The Curious Incident of the Dog in the Nighttime, 2018.
Talkback Thursdays
Vermont Stage actively facilitates conversations prompted by our work through our Talkback Thursdays program. Developed in 2014, this talkback series invites an array of local activists, advocates, experts, and scholars to discuss the rich themes of each production with our patrons. Vermont Stage has brought forth underserved voices and stories, leading fruitful conversations with organizations such as Outright Vermont, whose mission is focused on LGBTQ rights and inclusivity, for our production of Fun Home (2016), and the Stern Center for Language and Learning to empower those with learning disabilities for our production of The Curious Incident of the Dog in the Nighttime (2018). Over the last five years we have partnered with over 70 professionals from an array of fields to discuss the issues touched upon in our plays.

Local Economy
Vermont Stage is composed of a team of two full-time staff members, two part-time staff memebers, 12 board members, and over 100 artists who are hired as independent contractors annually, spending more than one third of our annual revenue on compensation. 85% of our artists and audience members live in Chittenden County, with the remaining 15% coming from Addison, Washington, and Rutland counties.


Each year, 10,000 people – including over 1,000 students – come together at Vermont Stage to experience top-notch, contemporary theatre; contributing to the cultural and economic vitality of Burlington and the surrounding regions. Over the past 25 years, local businesses have come
to rely on Vermont Stage as an economic driver, attracting over 150,000 locals and tourists downtown to see our shows, sending approximately $3.4 million in business to Burlington restaurants along the way. 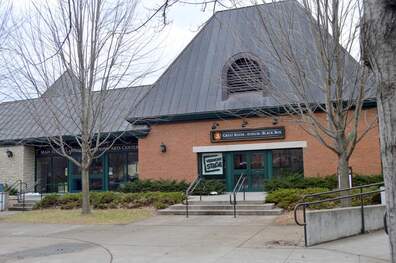 Move to Main Street Landing
In 2019, after 18 years as the resident theatre of FlynnSpace, Vermont Stage officially moved into our newly refurbished and outfitted residence at the Black Box Theatre at Main Street Landing Performing Arts Center. Our new performance venue offers vast improvements for our theatregoers comfort and pre-show experience. We are now able to provide free parking right outside of our venue. Our spacious elevator improves accessibility for our patrons with disabilities, and our new lobby is open an hour before the show so that our patrons can come early, relax and congregate while they wait to enter our performance space.

Additionally, our move to Main Street Landing offers Vermont Stage a wide range of possibilities and opportunities for our artists and designers. Our new performance space has 17 ft. ceilings, which is an increased height capacity from our previous venue, and allows for productions with elevations and raised floors. This provides a wide range of creative freedom for our designers both in scenic and lighting design. Our new venue also no longer has posts in the center of our performance space, which provides unobstructed views, and many opportunities for different configurations and scenic designs that could not be accommodated at the FlynnSpace. That being said, Main Street Landing’s playing space dimensions are similar to the FlynnSpace, which allows Vermont Stage to maintain the intimacy that our audience loves, with all of the additional benefits of our new venue. The Black Box Theatre has flexible seating  and can seat anywhere from 100-150 patrons, depending on the design of the show. 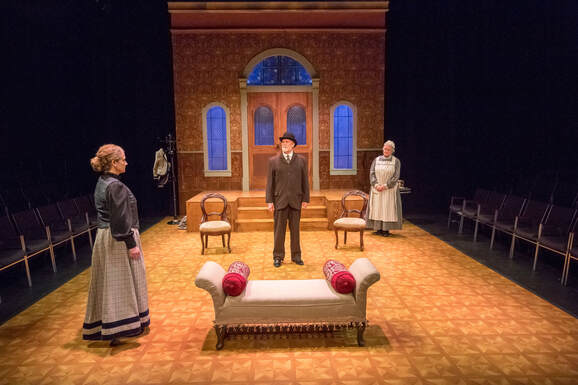 A Doll's House, Part 2. 2019
“The Vermont Stage production is the first play in
the company's new home at Main Street Landing Performing Arts Center's Black Box Theatre in Burlington. Scenic designer Jeff Modereger's tall set takes full advantage of the 17-foot ceiling, with the audience seated on three sides of a floor-level stage. Theatergoers who patronized Vermont Stage at its longtime previous quarters, FlynnSpace, will appreciate that no posts obstruct the view and that the lighting instruments are high enough not to shine in the audience's eyes. It's a pleasure to see the company's high production values supported by a suitable theater space.” Alex Brown, “Theatre Review: ‘A Doll’s House, Part 2,’ Vermont Stage, Seven Days 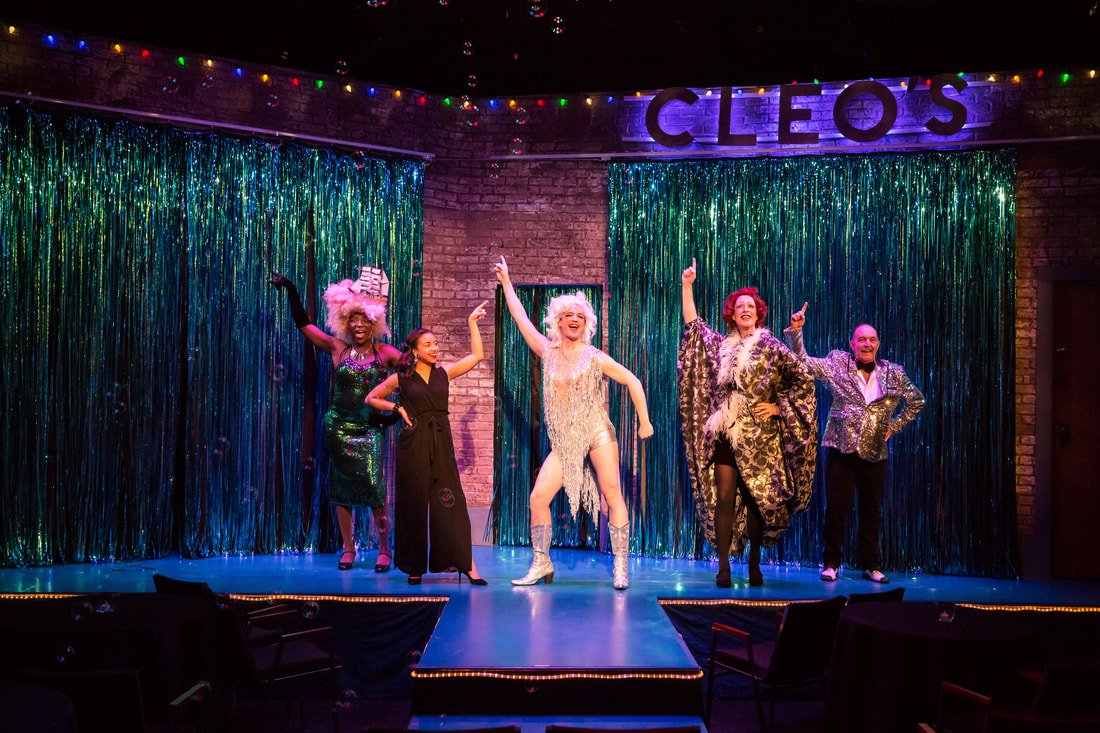 The Legend of Georgia McBride, 2019

THE LAST WIDE OPEN by Audrey Cefaly | October 2-20, 2019
Lina, a young waitress, and Roberto, an Italian immigrant, have been working together for years but rarely talk. If they do, it’s from a distance or gets lost in translation. But when a late-night thunderstorm finds them alone in the restaurant at closing time, their lives begin to intersect in surprising and mystical ways. Three alternate realities unfold as Lina and Roberto discover the unusual ways the universe conspires to bring us together. Fate plays its hand in this romantic play that features original songs and music.

WINTER TALES conceived by Mark Nash | December 11–15, 2019
Pour yourself a cup of hot cider, grab a plate of molasses cookies, and join us for our 15th annual holiday tradition filled with funny and heartfelt stories and songs to shine a bit of sunlight on the dark days of winter. Featuring brand new stories, poetry brought to you by the Young Writers Project, songs written and performed by Patti Casey and Pete Sutherland, and the return of our Winter Tales Gala.

RELATIVITY by Mark St. Germain |  January 22-February 9, 2020
In 1902 Albert and Mileva Einstein had a baby daughter. After 1904 she was never seen or spoken of again. Forty years later, a reporter interviews Einstein about this mysterious piece of his past, revealing shocking secrets about his family and his personal life. The author of Dancing Lessons, Freud’s Last Session, and Becoming Dr. Ruth showcases his signature blend of insight, intellect, humor, and heart in this fictional account of a legendary figure.

MARIE AND ROSETTA by George Brandt | March 4-22, 2020
Bringing fierce guitar playing and swing to gospel music, Sister Rosetta Tharpe was a legend in her time and a huge influence on Elvis Presley, Johnny Cash, Jimi Hendrix, and Ray Charles. Marie and Rosetta chronicles her first rehearsal with a young protégée, Marie Knight, as they prepare to embark on a tour that would establish them as one of the great duos in musical history. This play with music pays homage to Rosetta Tharpe’s extraordinary contributions to Rock and Roll.

THE PITMEN PAINTERS by Lee Hall, inspired by a book by William Feaver | April 15-May 10, 2020
Based on the triumphant story of a group of British miners who discover a new way to express themselves and unexpectedly become art-world sensations. An arresting and witty salute to the power of individual expression and the collective spirit, The Pitmen Painterstakes you on an unforgettable journey from the depths of the mine to the heights of fame.

THE BAKE OFF conceived by Cristina Alicea | June 9-14, 2020
Take one play, break it in three parts, add three directors and three casts, and—voilà!—you've got the 9th annual directing "bake off," an engaging exploration of the “ingredients" different directors can use to create the same play. Each performance is followed by a Q&A with the directors and audience. More information on the chosen play to "bake off" will be announced in early spring 2020.

No one contributes more to the success of our productions than our Corporate Sponsors. Corporate Sponsorships support the work of one of Burlington’s most vibrant performing arts organizations, providing critical operating support for Vermont Stage’s work onstage and in the community.  Vermont Stage offers many partnership packets to suit the benefits and giving needs of our partner companies.