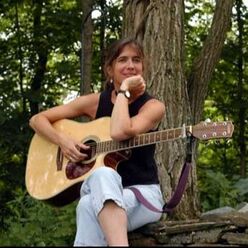 SUSANNAH BLACHLY is a fiddler, tunesmith & singer/songwriter from Marshfield, VT. She has performed with numerous bands over the years (Bellatrix, Wagtail, The Gross Domestic Products and, currently, Two Shoes Off) at a wide variety of venues including the Champlain Valley Folk Festival, the New World Festival and Valley Stage Festival. She has released four CDs of all original material and twice ranked on the Top Ten Best VT CDs of the Year in Seven Days, VT’s premier arts weekly. Robert Resnik, host of VPR’s “All The Traditions”, describes Blachly as “a master composer and performer of many styles of music.” In 2005 SingOut! magazine published her song “Secret Place” and featured it on a compilation disc with such folk luminaries as Pete Seeger and Maria Muldauer. That fall she had the honor of sharing the stage (and a couple of songs) with Canadian folk legend Bruce Cockburn at the North Of Eden retreat center. In 2005, her song “The Line Between” was named Song of the Year by Vermont Public Radio. Her most recent solo recording, “All The Colors” was released in August 2010 and features many well-known Vermont musicians. Susannah’s songs have been covered by Vermont artists Rebecca Padula (After Rain), Karen McFeeters (Hope Begins in the Dark), and Mayfly (Honey Man). Her songs Take What You Need and The Line Between are featured on the film “Shout It Out,” produced by Kingdom County Productions. Susannah has also been a guest musician on numerous recordings over the years, including Kristina Stykos’ “In The Earth’s Fading Light,” Rebecca Padula’s “Fire and Water,” Karen McFeeters’ “Here and Now,” Lewis Franco’s “Swingin’ In Daddyland”  and, most recently, Patti Casey’s 2010 release “Heart of a Waiting Boy.”

Susannah’s songwriting emerged from her work in the Archetypal  Dream Work Therapy process developed by Marc Bregman (see www.northofeden.com). She wrote her first song “Girl In the Photograph” based on a dream she had where she stepped inside a black & white photograph of herself as a small child. The child in the dream was singing a Bach Aria in full voice. The dreamer stood behind the child, placed her hands on the child’s shoulders, and began to sing with her. Many of Susannah’s songs since then have been inspired by dreams and the Archetypal Dream Work.
​
Susannah lives in Marshfield, Vermont with her son, Adam, her husband, Tom, her dog, Monday, and Bob the cockatiel. She is a psychotherapist by day and works with both kids and adults. In the rest of her free time she is an actress, working with both the Unadilla Theater in East Calais VT (summers) and Shakespeare In The Hills of Plainfield, VT.