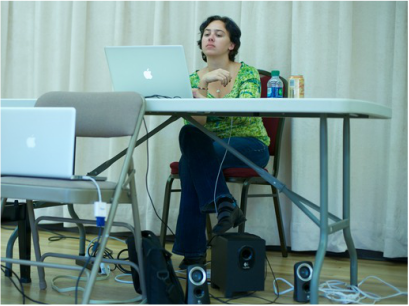 Martha is thrilled to be back designing at Vermont Stage after a brief hiatus, during which she became a mama. She is a formerly NYC-based designer who has recently moved to the country in PA. Interesting past designs include 2 site-specific productions at the Hermitage Museum in Norfolk with Virginia Stage Company: The Dream Clinic and With Her Name Upon My Lips; multiple shows with NYC Children's Theater including two musicals written by Laurie Berkner; oodles of shows with Vermont Stage, starting with Photograph 51; two shows across the pond: Next Time (Power Plays, Edinburgh Fringe Festival) and Gin for Breakfast (Whatever Guise Productions, London); and a slew of shows in New York, many of those directed by Cristina Alicea back in the day.