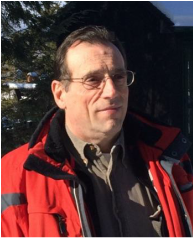 Chuck Kletecka is a New York City native who has lived in Vermont for twenty-one years. He was a volunteer with Gay Men's Health Crisis starting in the early 1980s, and saw first-hand the devastating impact of AIDS on the gay community and its associated stigma. In 1985 he himself was diagnosed with AIDS, at a time when no effective treatments were available and the diagnosis was, in effect, a death sentence. In 1994 Chuck moved to Vermont with his long-term partner Robert; at the same time, the life-saving, highly effective anti-viral drug treatments became available. Since then he has served as Chair of the People With AIDS Coalition, and on various HIV policy advisory groups.