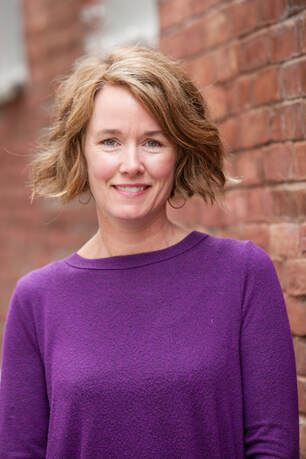 AMY RILEY is the Director of Education & Founding Director of Vermont Stage Youth Company. Amy grew up outside of Albany, NY and as the youngest of nine siblings, entertained her large family and friends with roller skating and tambourine shows in her garage. She traded in her roller skates (kind of) for serious drama as a theater major at LeMoyne College in Syracuse, NY, where she studied everything from Brecht to Comedia del’ Arte. Post-undergraduate, she was accepted into the Second City Conservatory in Chicago and studied alongside extraordinary improvisers and sketch comedy artists. Amy moved to NYC and joined the Uprights Citizens Brigade and performed on their television show on Comedy Central.

Since moving to Vermont in 2001, Amy has traded much of her time on stage for time in the classroom. She discovered the impact and importance of theater as a vehicle for growth and youth development. She directed and taught at FlynnArts for the past 6 plus years and was the Producing Artistic Director of the Flynn Youth Theater Company for the past 3. She is proud of the arts integration work she’s done for many area schools as well as teaching and directing for middle and high school theater programs.

Amy has performed locally with Vermont Stage, Stealing from Work, and Vermont Young Playwrights, among others. She is overjoyed at the opportunity to create a program that honors the unique and brilliant voices of theater students in our community.